skip to main | skip to sidebar

What are we gonna do about this? 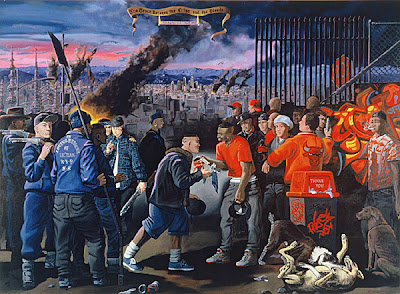 I was on the subway heading home after a day at school, standing and holding the pole, and zoning out. Out from behind me a young man steps up to two other young men, speaking loud and fast. I assume at first that they are friends, but the tone quickly grows hostile and while I first thought he was saying, "What's up?" and mentioning he knows the brother of one of them, it becomes obvious he is really telling him, "You know me," as in, "You've seen me around, don't f@*k with me." Then I'm thinking this guy has beef with someone they all know, until I start to really listen in and wake up out of my haze.

At this point I understand clearly: the boy on offense wants one of the other kids to take off something. Some beads. And I realize, a bit delayed, that he's wearing red and the guy against the door has on blue. The kid against the door is obviously not as 'thug' as Mr. Red, and while he does not just give in, he is saying things like, "I don't try to disrespect you. I don't tell you what to wear." It is clear that he is not feeling this out-of-nowhere conflict, and his friend next to him has all but vanished. The entire subway car is watching at this point, as Mr. Red gives him his final warning, "I ain't kidding, take 'em off. I'm packin', son, I don't f@*k around." Blue takes his beads and he tucks them into his shirt. Not exactly taking them off, but Mr. Red is pleased and he walks back past me, to his friends. The train stops at 155th and Blue and his friend get off. Tension releases. Weird.

Being the sometimes naive-but trying to be all accepting-everything has a reason-kind of guy, I have done past research in attempt to understand gangs. It seems like if someone has no family and no one to turn to, a gang could be a support system. They might even have a place for people to stay. Who knows? I don't. But it seemed like a good reason to join: if you are in need. Even the history of some gangs in the U.S. leads to the idea that people gathered together to protect themselves from oppressors like police or racists (often both).

But how were these kids on the train failed? In what way? And I won't begin to judge them, or their lives, I do not know them. Though I do know my students. I know the ones who wear colors and beads. And they have families. They live in homes and people care about them. Teachers care about them. They aren't organizing to battle racism or injustice. But they wear the colors and beads for other reasons. I suspect childish, adolescent, and 'cool' reasons. What happens when one of them gets into the same situation? I know at least one that will barely take his hat off when asked in school. Would he take off something in a situation like that? Testing his manhood? I wouldn't bet on that. And then what happens?

Intellectually, I can legitimize gangs. They came out of something necessary. They have, in my opinion, a justified and admirable history. Is there a way to bring this into the classroom and effectively prevent our students from engaging in hostility? Or does that just come across as another lecture from someone that "doesn't really understand what it's like?" Will documentaries and interviews that teach us about gang history help to lead people back to protecting rather than randomly violating each other?

I'm just concerned. I'm just wondering. How can this train episode be avoided? How can we teach the distinct difference between reality and art? Between reality and fantasy? Between ignorance and the reality, and finality, of violence? Is the situation on the train even avoidable? Or do we, do I, just accept the sad fact that violence, or near violence, can be anywhere at any time? I think but don't know. Peace. A. 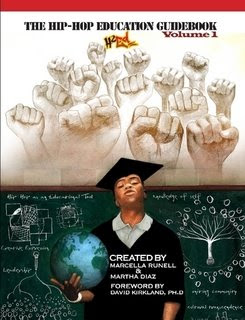 Announcing the creation of THE HIP HOP EDUCATION GUIDEBOOK: VOLUME 2
check out this release from the hip hop association:

"Due to overwhelming demand for effective Hip-Hop education resources H2Ed published the first ever Hip-Hop Education Guidebook: Volume One in February 2007. The guidebook features interdisciplinary standards-referenced lesson plans written for and by teachers across the U.S. The media is taking notice of this positive resource for educators.

The guidebook has been featured in: Black Issues Book Review, El Diario, Vibe, All Hip Hop, Teaching Tolerance, WBAI, WNYC, Latination Television, and Rethinking Schools. Educators from New York University to the University of Wisconsin, Madison and from Bank Street College of Education to Teach for America are all embracing it as an innovative resource. All proceeds from the Hip-Hop Education Guidebook have been donated to the Hip-Hop Association education initiative.

The positive response from educators and media enforces the need to continue publishing Hip-Hop education resources. H2Ed is pleased to announce its call for submissions for the Hip-Hop Education Guidebook: Volume 2. We encourage creative lesson plans in “non-traditional” Hip-Hop education subjects, such as math, science, ESL/ELA, social justice, etc. In the spirit of youth-culture-fusion we welcome submissions that incorporate other musical forms such as dance-hall, reggae, punk, emo, etc.

If your submission is selected you will be published in the Hip-Hop Education Guidebook: Volume 2. You may receive a wide range of media coverage, interview opportunities, and international exposure. In addition, you may be eligible for wholesale guidebook orders. Lessons we are unable to use for Volume 2 may be shared on our Hip-Hop education resources website."

peace!
Posted by hiphoped at 8:44 AM No comments: